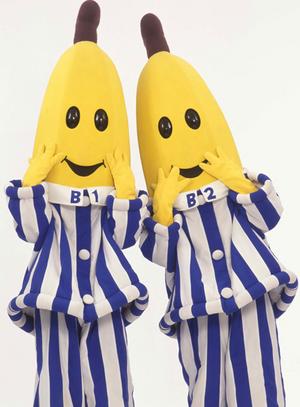 Pyjamas make the Bananas.
"Bananas in pyjamas are coming down the stairs..."
Advertisement:

Bananas in Pyjamas is a beloved Australian children's television series that originally ran on The ABC in its suitmation incarnation from July 1992 to December 2001, before undergoing an extensive Retool when it was revived in 2011 as an All-CGI Cartoon.

Like the other breakout Australian children's franchise of the 1990's, you would be incredibly hard pressed to find an Australian child of Generation Y or later who's never even seen the show let alone one who didn't love it as a child, based on the the ubiquitous merchandising and instantly recognisable Theme Song. All this for a show where the episodes originally only ran for five minutes each.

The idea for the show came from the song of the same name, which later became the show's Title Theme Tune. The song was written in 1967 by British composer Carey Blyton (nephew of author Enid Blyton) who included it in a picture book of humorous verse,

also with the same name, which was first published in 1972. The Australian version of Play School soon incorporated the song into its catalogue, and in 1979 an animated short film of the song

was created to be screened during the show. This film and a banana toy that subsequently joined the show's "toy cast" formed the physical basis of B1 and B2.

The show made its debut on July 20, 1992, featuring a cast of two bananas in pyjamas (B1 and B2), three teddies (Amy, Morgan, and Lulu) and a sometimes conniving if actually rather nice corner shop owner in Rat in the Hat, who all lived in the cul-de-sac of Cuddles Avenue. The show soon proved to be immensely popular among the toddler crowd and the show was exported to many overseas territories including The United States, where three episodes would often be broadcast together in a fifteen minute block (in its' last year, it was paired with The Crayon Box).

In the original incarnation's last season broadcast in 2001, some new barnyard characters were added, including two chickens called "Gregory" and "Peck," Dolly the sheep, Camembert the cow, Pedro the pig, and Flash the fish. The series then went on an indefinite hiatus before it was announced in 2009 that a new CGI version of the show was in the works. The CGI version premiered in 2011 to at best mixed reviews and vocal disappointment from the show's former fanbase. However, the episodes from the original incarnation are freely available to watch on YouTube and purchase on DVD.