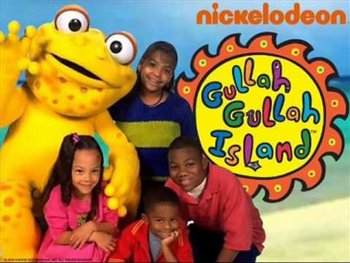 So come and let's play together
In the bright, sunny weather.
Let's all go to Gullah Gullah Island.
Advertisement:

Gullah Gullah Island was a children's show on Nickelodeon's Nick Jr. block that aired from 1994 to 1998. The block's first live-action show stars a Gullah family and their tadpole friend Binyah Binyah Polliwog living on an island off the coast of South Carolina.