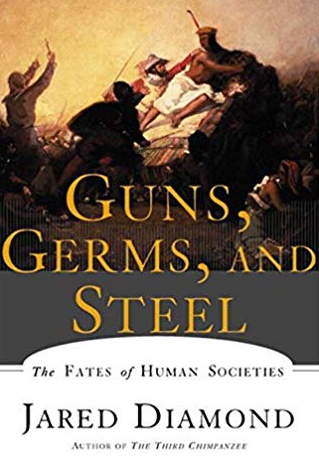 Guns, Germs, and Steel: The Fates of Human Societies is a 1997 non-fiction book by Jared Diamond. It became a bestseller, and in 2005 it received a documentary Mini Series produced by the National Geographic Channel. The documentary covers the theories in the book on why a disparity between civilizations exists as such that there are people living in an industrialized society while at the same time there are still people with primitive lifestyles.

Produced by and starring the author of the book Jared Diamond (as himself) as he goes around the world trying to figure out why the world in the present day is unequal with one civilization more advanced than the other. Diamond went to New Guinea originally to study about the birds when in his trips, one of his New Guinean friends asked him an Armor-Piercing Question: "Why do white people have so much cargo, but we New Guineans have so little?" Diamond found the question that seemed simple at first to be much more complicated and thus went on his journey to figure out the answer to the question.

In between Diamond's journey, the theories was slowly explained throughout a re-enactment of historical events from Ancient Middle East to the Spanish conquest of the Americas to the European colonization of Africa.

The book and the documentary provide examples of: