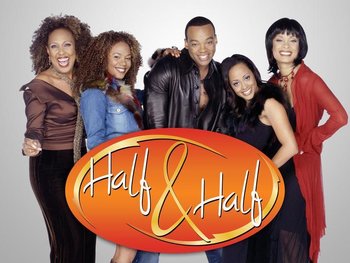 Half & Half is a sitcom that aired on UPN from 2002-2006. The series focused around Mona (Rachel True) and DeeDee (Essence Atkins), a pair of paternal half-sisters that couldn't be more different that reconnect as adults and navigate through their growing relationship. Also as part of the main cast was Phyllis (Mona's mother played by Telma Hopkins), Deirdre aka Big DeeDee (DeeDee's mother played by Valarie Pettiford), Spencer (Mona's sometimes-Love Interest played by Chico Benymon) and Adam (Mona's Camp Gay assistant played by Alec Mapa).

The series was scheduled to continue on The CW, but unfortunately was left off of the launch schedule. The series ended after 4 seasons.

Not to be confused with the manga.

The Big Learning the Tropes Episode: