Tomboy with a Girly Streak 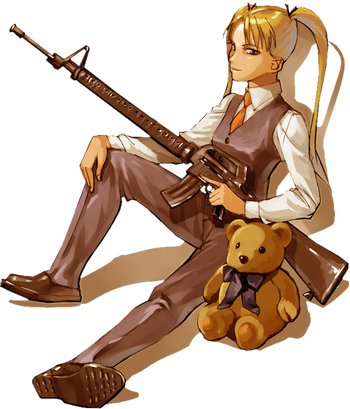 Even the least girly of all girls love their stuffed animals.
"Why's everybody look so surprised when they find out I can sew? Yeah, I got a hobby! So what?!"
— Vanessa, Dragalia Lost
Advertisement:

Most Tomboys in fiction tend to dislike "girly" things and being associated with them, but sometimes something sneaks through. It may turn out that she likes the color pink, has a thing for frilly and girly dresses, is easily enamored by cute things, or is a surprisingly good cook and has neat domestic skills. She may be a Bruiser with a Soft Center. In other words, this character may have a tomboyish physical appearance, but her interests will tend to be a mixture of tomboyish and girly interests, and her personality can swing either way.

Reactions to this trait may vary. The tomboy in question, particularly if she still has a tomboyish personality, might be ashamed of her girly lapse and try to hide it, at least at the start, or she might actually be proud of it and be ready to give a hard smack to anybody who teases her about it. Usually, her peers will be surprised due to her usual boyish wear and outward attitude, or vice versa, where she looks girly but acts boyish, and those who tease will pay. However, if she has a girly personality, she is more likely to be open about her girly side, and not be ashamed of it, and other than correcting other people by saying that she's not exactly a tomboy, she will usually not get angry when other people call her a tomboy (unless they say something really bad about it, usually by calling her unfeminine, in which case she will punish them for it), although nonetheless, she will accept compliments for cleaning up nicely. In some cases, these characters may even object to being called tomboys, despite their somewhat tomboyish outer physical appearance, because of their girly personality and their girly interests, even if they also have tomboyish interests as well.

The inversion (and normal Foil) is Girly Girl with a Tomboy Streak.

Unlike everyone else in the town, Winifred is fascinated and obsessed with the Boxtrolls and more specifically the gory, horrific false propaganda spread around them and their vile acts. Needless to say, she's very disappointed to learn the truth.

Unlike everyone else in the town, Winifred is fascinated and obsessed with the Boxtrolls and more specifically the gory, horrific false propaganda spread around them and their vile acts. Needless to say, she's very disappointed to learn the truth.