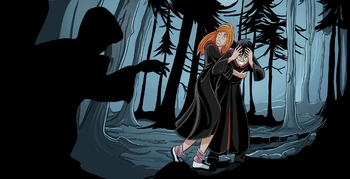 "First-years... in the forest..." the icy voice hissed. "And look who it is... how very pleasant to see you here, Harry Potter..."
So many stories have asked the question: "What if Harry Potter was a girl?" Few stories, however, seem to bother with the question "What if Ron Weasley was a girl?" So, just to be contrary, this story will. Everyone else here is going to be their canon genders, but Ron's going to be a girl, and then we'll see how this might change the story.
—Author's intro
Advertisement:

is a Gender Flip For Want of a Nail Harry Potter Fan Fic trilogy-in-the-works, written by Hyaroo

, the Secret Identity of Troper Roo.

In this Alternate Universe, the second youngest Weasley child was born a girl, and so the first friend Harry Potter makes on the Hogwarts Express is not Ronald "Ron" Weasley, but the decidedly female (if somewhat tomboyish) Veronica "Ronnie" Weasley. She's much like her male counterpart, in that she's an often blunt and insensitive Deadpan Snarker and Quidditch fanatic with a nasty temper, but she has slightly different talents, priorities and hang-ups. The most obvious difference is that she's absolutely rubbish at chess but has a strange affinity with animals.

Thanks to the Weasley dynamic being slightly different (Fred, George and Percy are a lot more overprotective towards Ronnie than they were towards canon Ron) and Ronnie herself making a few different choices, the Butterfly Effect kicks off full-force and things turn out very differently than in canon.

For one thing, since Harry's first meeting with Neville and Hermione turns out very different, he befriends them much more quickly, and as a result the canon trio has become a quartet — nicknamed "Potter's Gang" by a spiteful Snape, who unjustly sees the four as a next-generation version of the Marauders. This leads to Harry and friends having an even worse relationship with Snape in this story than in canon, and this again kicks off a few plot points somewhat early and leaves Harry confronting things he might not be ready for yet.

At the time of writing, the second story in the trilogy has been finished, and is titled Weasley Girl: Secrets of the Past

The third story, which is being planned, will be called Weasley Girl: War of the Prophecy.

, where Hermione holds a lecture on Gender Flip stories and uses Ronnie as one of the examples.