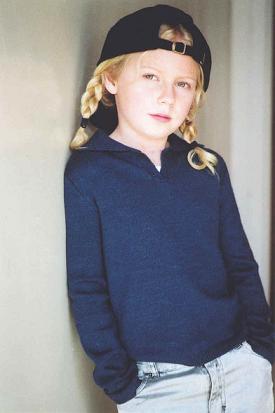 Derived from the term "tomcat" for a male cat, the Tomboy is a major character archetype and yet is also a somewhat vague concept, and it is associated with the gender variance/nonconformity.

A tomboy is a girl who has tastes and behaviors usually associated with boys. Because these associations are culture-dependent and tend to change, what exactly constitutes a "Tomboy" is subjective. Especially historically, any girl interested in science, vehicle mechanics, house and/or building construction and/or renovation, sportsnote especially outside of designated "girls' sports" like tennis, gymnastics, figure skating or cheerleading (which many people do not regard as a sport, despite being recognised as one by the International Olympic Committee), or combat has been called tomboyish.

However, even where gender roles are relatively lax or fluid, choices made regarding media consumption, recreation, and fashion, remain segregated for the most part. Thus the Tomboy remains a current figure and a popular one for various reasons: A woman might chafe at how "femininity" limits her choices and find a like-minded heroine empowering; boys might find a girl who likes the things they do more relatable. Tomboys are often seen as a great way to appeal to both male and female demographics with the same characters. For still others, a love of Tomboys may have nothing to do with their opinion on gender. The audience finds (minor) transgressions of accepted roles "cute" or funny. A great deal of media takes this latter position, sometimes presenting the Tomboy as sympathetic but, in the end, immature or even troubled.

In the story, justifications also vary. Some girls might just enjoy doing boyish things more. Perhaps she's Daddy's Girl and so wants to do things with him. A similar possibility is that she was Raised by Dudes. Maybe she has no brothers and so the father raises his daughter the way he would a son. It could be that she has no sisters but several brothers, and to be included with them she engages in boyish activities. Or maybe she is socially awkward and simply wants to go somewhere where she thinks the awkwardness will be accepted because she is a "foreign visitor" anyway.

While Tomboys are subject to Flanderization, according to which they all hate "girly things" (like the color pink, dressing up, playing house, shopping), many in Real Life simply happen to fall outside of gender norms in a few respects; aside from these "quirks", a Tomboy might also have "feminine" interests. Even if she doesn't, she need not have any antipathy toward those who do. Indeed, her best friend may be a Girly Girl. There are generally two types of tomboys, depending on their degree of masculinity vs. femininity:

Between the two types of tomboys, the effeminate tomboy is considered somewhat more socially acceptable than the butch tomboy. Keep in mind that our views of gender have actually changed over time, and some traits which now might be considered masculine or feminine, actually weren't in the past, so this is mostly only valid for modern characters. And also keep in mind that just because a girl is a tomboy does not necessarily mean that she is a lesbian, they're split into three types, such as straight, gay, and bisexual.

The outcome of the Tomboy's character arc tends to indicate the intended Aesop. If the Tomboy doesn't "grow out of it," or find her inner femininity, this suggests that gender and sexuality boundaries are more permeable and that transgressing these boundaries is acceptable. If, on the other hand, a Tomboy needs to be normalized in some way, this implies that her Tomboyish appearance or traits are somehow problematic. Consequently, Tomboyish traits can serve as an exploration of gender and sexuality. If there is a contrast between the two types of tomboys listed above, the media, more often than not, usually portrays the type 2 effeminate tomboy as the "better" type of tomboy. A more butch Tomboy may grow into The Lad-ette, while a more feminine one may grow up into a relatable Girl Next Door.

"Tomboy" as a term for a girl who acts like a stereotypical boy is Older Than Steam, having been first given that meaning in 1592. Previously, "tomboy" referred to an especially boisterous boy. Considering the goddess Artemis could fairly be described as a tomboy, the trope itself is at least Older Than Feudalism. However, the definite golden age of literary tomboys was the period around the late nineteenth and early twentieth centuries, a trend that essentially began with Little Women's Jo March, making her something of a Trope Codifier, and extended through The Great Depression or so. In the 21st century, with gender norms gradually becoming less strict, the idea of the tomboy has started to fade (although it's still a long way from disappearing entirely), while the Tomboy with a Girly Streak and Girly Girl with a Tomboy Streak have become more common.

Having one of these attributes doesn't necessarily make a girl a Tomboy. Depending on local norms, a girly girl may have some of these traits, and the variety of Tomboys is great enough that no one trait can be called essential.

Even "local norms" are inconsistent. Consider for example Ukyou and Akane from Ranma ½. Akane is repeatedly identified as a bit of a Tomboy, while Ukyou gets the label of "cute fiancé". Yet they both share several of the traits above. (This is probably an intentional discrepancy within the story). In the end, definition is impossible, and identifying a Tomboy comes down to "knowing it when one sees it" (though the quality of this "knowledge" is dubious).

No examples for this page, please. Put all your examples under one of the various traits associated with Tomboys. If we don't have a subtrope for your specific Tomboy please feel free to use the TLP to create a trope for it.

The Spear Counterpart tropes are In Touch with His Feminine Side or Sensitive Guy or Tomgirl, for a male who does things which are considered 'girly' and Otokonoko Genre (also called and known as "Tomgirl" in the West), a Japanese genre for men about male crossdressers.