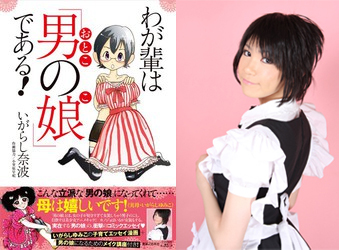 An author and his manga.
Advertisement:

"Otokonoko", also known as "Otoko no Musume", is a Japanese genre of romantic and/or erotic stories for men, focusing on Attractive Bent-Gender male Crossdressers. The name is a pun.Details The word "otokonoko" normally means "boy" (literally "male child"), but swapping the "ko" meaning "child" for a different "ko" meaning "girl" gives a compound that Japanese sites like to translate as "male maiden". It is sometimes called '"josou" ("women's clothes"), a more generic term for male crossdressers. Western fandom uses the terms "trap", note  Deriving from how otonoko or other similar male characters tend to appear convincingly female due to their effeminate appearance and delicate figures, until the male audience is caught off-guard by the fact that they aren't female. Some people find the term offensive due to perceived Unfortunate Implications involving the Unsettling Gender Reveal trope and the negative connotations of the normal meaning of "trap". "femboy", and — less often — "tomgirl" (as the opposite of Tomboy).

Otokonoko features both girl-on-crossdresser and guy-on-crossdresser stories (it's one of the few places where you will find m/f stories and m/m stories side-by-side in the same magazine). The target audience is men who crossdress (or are interested), and men who have a fetish for crossdressers, and the art styles and tropes are typically those of male-oriented romance / ecchi / hentai material. There is also a significant Periphery Demographic of female readers. (Although guy-on-guy otokonoko is often mistaken for Boys' Love Genre, and some Shoujo, Josei, boys love works, and otome games do include characters that identify as otokonoko, anything targeted to women is not the otokonoko genre.)

Although cute crossdressers in romantic situations have been an occasional theme in Shōnen and seinen since the '80s, otokonoko did not start as an identified genre until about 2004. Most works created before this are not usually considered part of the genre, although some have been grandfathered in.

An otokonoko character must be anatomically male (no Hermaphrodites or Gender Benders) but look convincingly like an attractive girl. Most identify as male, but even when the character identifies as female, few works try to deal with actual Transgender issues in anything like a realistic way. Since otokonoko is mainly an otaku thing, otokonoko are quite likely to wear Sailor Fuku, Meido, Miko, Cat Girl or Naughty Nurse Outfits as well as "ordinary" female clothes.

Some non-fiction magazines exist to provide advice and help with crossdressing for men who identify as otokonoko in Real Life and who crossdress to achieve the look (or want to).

Most otokonoko is technically seinen, although some is shounen. Works aimed at a female audience are never this, so don't list Shoujo, josei or boys' love.

The following works either technically aren't Otokonoko or precede the establishment of Otokonoko as a genre, but have been influential in its development: