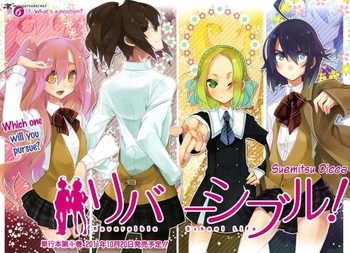 After angering his father over an incident with a girl at school, Shuu Kaidou, a son of an electronic company's president is sent to all-boys school, St. Stokesia Academy. However upon arrival, he sees half the campus populated by cute girls, one of which he locks eyes with. But when he meets the principal, he is told by her that in order to help the academy's students understand relationships between men and women, for alternating weeks half of them dress up and live as girls.

And then the "girl" from earlier, Tsubaki Yaesaki shows up with carrying an extra girl's uniform and wig and is appointed Shuu's partner coordinator committee member. His job: make Shuu look cute.

A manga penned by Shuu Shirase and drawn by Suemitsu Dicca, Reversible School Life looks in antics and the relationships between Shuu, Tsubaki, Shuu's roomate Matsuyuki Touma and the class president Natsume Aoi as they deal with their dual lives in St. Stokesia.

Compare Princess Princess, only with everyone supplying the traps.