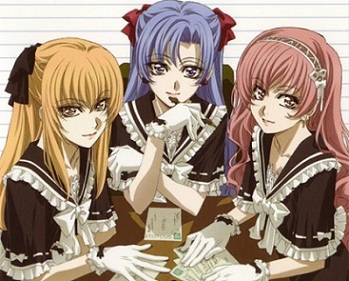 Such a lovely cast of heroes...
Tooru: At this famous private boys' school, I, Kouno Tooru, who transferred here in the middle of the term, without realizing it, have had the door to my destiny opened before me. I thought I'd live a dull life in this all-boys' school, but what's this girl doing here?
Mikoto: I'm a guy!
Advertisement:

Princess Princess is an manga, anime, and live-action series by Mikiyo Tsuda.

Basically: What if you suddenly transferred to an all-boys school, only to see girls attending? That's what happened to Tooru Kouno. But he soon finds out they're not girls. They're actually guys: Mikoto Yutaka and Yuujirou Shihoudani, who are cross-dressing as part of a "Princess" program to let out the straight male student population's sexual frustration. In addition to that, Tooru's been chosen to become the third Princess. At first he doesn't want to, but he finds out there's lots of benefits to becoming a Princess, so he accepts.

Along the way, we meet Akira Sakamoto—a boy who's revered by most of the school but has low self-confidence, Sayaka, Tooru's "sister" (who's really his cousin and also happens to be his stalker, who's madly in love with him), Natashou, the Princesses' costume designer, and Arisada, the Student Council president who organizes events for the Princesses (and who was a Princess himself before).

Not to be confused with Puri Puri, a manga featuring an Unwanted Harem. Or Princess Prince, another manga featuring cross-dressing (but this time with an actual royal in the role). OR the webcomic of the same name. Nor the popular all-girl Japanese band from the 90s. Nor, for that matter, the character from Adventure Time.