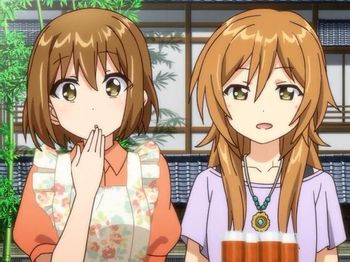 The "mums in aprons" style can be useful in telling the kids from the parents.
"No matter how much you wish for it, nothing is going to happen between you and my mother."
— Rias Gremory, High School D×D
Advertisement:

Because of either Older than They Look or Younger than They Look (or both), a parent looks about the same age as the parent's child, enough to be mistaken for siblings. This happens most often with mothers and daughters, but it can work with any gender combination. This could also simply be a result of the art style, especially with Generic Cuteness.

See also Absurdly Youthful Mother and the other subtropes, especially Adoptive Peer Parent and Mistaken Age. This can be invoked in a Family Relationship Switcheroo, to prevent anyone from realizing they actually are mother and child.

Dr. Drakken assumes that Kim's mother is her sister. It's not hard to guess why.

Dr. Drakken assumes that Kim's mother is her sister. It's not hard to guess why.