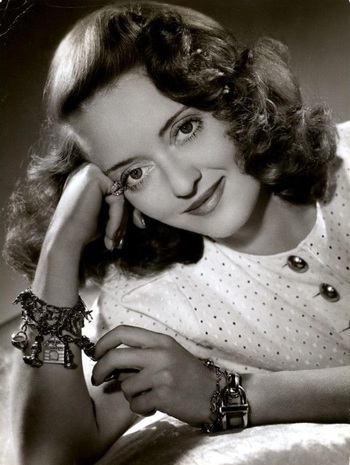 Ruth Elizabeth "Bette" Davis note Pronounced "Betty", not like Bette Midler — in fact, according to Joan Crawford, calling her "Bet" was Davis' Berserk Button, even though even the song named after her "Bette Davis Eyes" makes that mistake. Named after Honoré de Balzac's La Cousine Bette (April 5, 1908 – October 6, 1989) was an American actress from Lowell, Massachusetts. Noted for her willingness to play unsympathetic characters, she was highly regarded for her performances in a range of film genres; from contemporary crime melodramas to historical and period films and occasional comedies, though her greatest successes were her roles in romantic dramas.

After appearing in Broadway plays, Davis moved to Hollywood in 1930, but her early films for Universal were unsuccessful. She joined Warner Bros. in 1932 and established her career with several critically acclaimed performances. In 1937, she attempted to free herself from her contract and although she lost a well-publicized legal case, it marked the beginning of the most successful period of her career. (She wound up staying at Warners until 1949.)

Until the late 1940s, she was one of American cinema's most celebrated leading ladies, known for her forceful and intense style. Davis gained a reputation as a perfectionist who could be highly combative, and her confrontations with studio executives, film directors and costars were often reported. Her forthright manner, clipped vocal style, and ubiquitous cigarette contributed to a public persona which has often been imitated and satirized.

Davis was the co-founder of the Hollywood Canteen and was the first female president of the Academy of Motion Picture Arts and Sciences. During her career, she received 10 nominations for the Academy Award for Best Actress and won twice, and she was the first woman to receive a Lifetime Achievement Award from the American Film Institute. Her career went through several periods of eclipse, and she admitted that her success had often been at the expense of her personal relationships. Married four times, she was once widowed and thrice divorced, and raised her children as a single parent.

Her final years were marred by a long period of ill health, but she continued acting until shortly before her death from breast cancer, with more than 100 film, television and theater roles to her credit. She also lucked out with the above Kim Carnes song catapulting her back into the pop culture spotlight.note She sent thank-you notes to both Carnes and the song's two writers. In 1999, Davis was placed second, behind Katharine Hepburn, on the American Film Institute's list of the greatest female stars of all time.note Davis no doubt would have deeply resented finishing second behind Hepburn, as she already resented Hepburn for beating her to three Oscars. (Yes, we know she never won three Oscars. Davis resented that too.)

Davis is portrayed by Susan Sarandon in the 2017 FX series Feud: Bette and Joan, which depicts her rocky relationship with the aforementioned Joan Crawford during the filming of What Ever Happened to Baby Jane? in 1962.

Bette Davis films with pages on TV Tropes include: