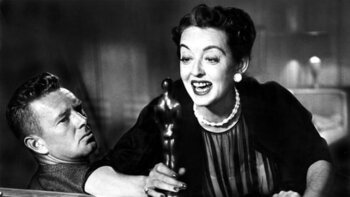 The Star is a 1952 drama film directed by Stuart Heisler and starring Bette Davis.

Margaret Elliot (Davis) was once a big, Oscar-winning movie star but has seen her career fade as she advances into middle age. Lately things have been going quite badly for her; she's so broke that she has started having to sell off her possessions, she's facing imminent eviction from her humble apartment, and she's still plagued by her grasping, greedy sister and brother-in-law. She is also desperate to conceal her reduced circumstances from her daughter Gretchen (14-year-old Natalie Wood), who lives with Margaret's ex-husband, now a famous director.

Feeling sorry for herself, Margaret takes her Oscar statue and goes off on a drunk-driving joyride that winds up with her getting arrested for DUI. Enter Jim Johannsen (Sterling Hayden), who bails Maggie out of the clink. Jim starred with Maggie in a movie years ago, before the war, but then joined the Navy and after the war wound up going into business and owns a boatyard. Jim, who likes Margaret and still remembers her getting him that film part back in the day, lets Margaret stay with him after she is in fact evicted from her apartment. Romantic sparks fly, but Margaret still dreams of a comeback in the movies.

Bette Davis received one of her ten real-life Best Actress Oscar nominations for her performance.