Film / Watch on the Rhine 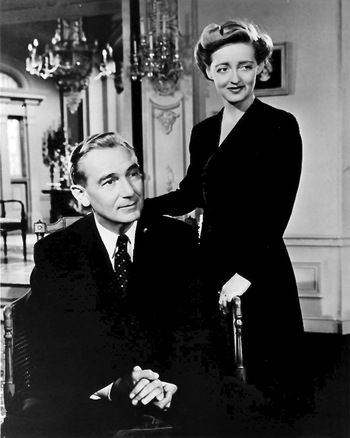 Watch on the Rhine is a 1943 wartime drama film adapted from a 1941 Lillian Hellman play, directed by Herman Shumlin and starring Paul Lukas and Bette Davis.

Kurt and Sara Muller (Lukas and Davis) and their three children have come to America to visit Sara's family, the Farrellys. Sara has lived in Europe with Kurt for nearly 20 years and Sara's mother and brother have never met her husband and children. It is soon revealed that Kurt has spent the past seven years as an anti-fascist guerilla fighting against Hitler and the Nazis. The Mullers have come home so that Kurt can recuperate after being injured rescuing another anti-fascist, but Kurt's work is put in danger again when a Farrelly houseguest, Count Teck de Brancovis (George Couloris), figures out what Kurt has been up to in Europe and decides to sabotage his next mission.

Watch on the Rhine was nominated for four Academy Awards. It lost Best Picture to a little film called Casablanca, but Lukas beat Humphrey Bogart for the Best Actor award.