Film / The Voice of the Turtle 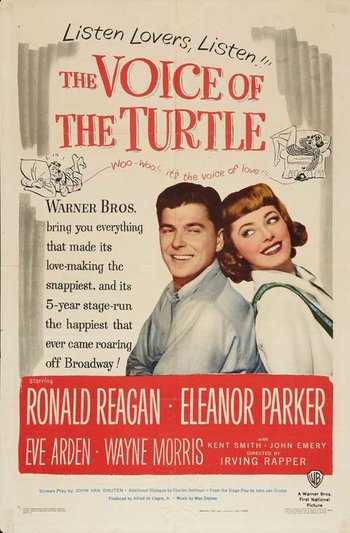 The Voice of the Turtle is a 1947 romantic comedy film directed by Irvin Rapper, starring Eleanor Parker and Ronald Reagan. It was adapted from the hit 1943 Broadway play of the same name by John Van Druten.

The film is set in December 1944, with World War II still underway. Sally Middleton (Parker) is a struggling actress in New York. As the film opens, she is getting dumped by her boyfriend, Broadway producer Kenneth Bartlett (Kent Smith). Ken explains to Sally, gently but firmly, that he isn't looking for long-term attachments.

Sally is friends with Olive Lashbrooke (Eve Arden), also a stage actress. Olive is signaled as clearly as a 1947 movie can signal as a woman who has lots of boyfriends and is far more casual about sex than dreamy romantic Sally. One night, when she gets a call from a Navy officer beau, Olive asks Sally to entertain her other boyfriend. That other boyfriend is Bill Page (Reagan), an Army sergeant who is in New York on leave.

This film was later re-released as One for the Book, and is almost always referred to by that title when it's aired on television.