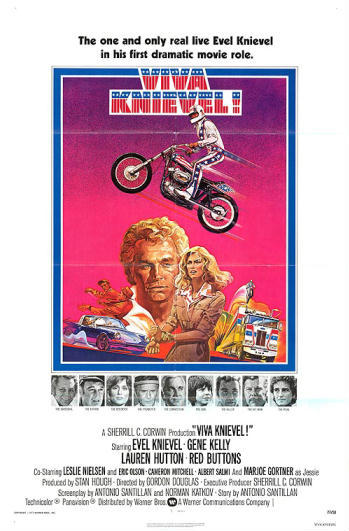 And his last, too.
"Yeah... hard to believe Evel Knievel was a mega-giant superstar, but in defense of the seventies, you have to remember that most people were coked up and had at least one venereal disease."
—Mike Nelson

Viva Knievel! is a 1977 action film starring Evel Knievel as a strangely dressed man who jumps his motorcycle over things.

As the greatest bike jumper in the world, Knievel is offered a huge sum to exhibit his skill in Mexico. But the engagement is actually a trap laid by a drug lord (Leslie Nielsen), who intends to kill Knievel as part of an elaborate scheme to smuggle cocaine into the United States. Along the way, Evel must recover from a traumatic crash, reunite an alcoholic mechanic (Gene Kelly) with his estranged son, and win the affection of a standoffish reporter (Lauren Hutton).