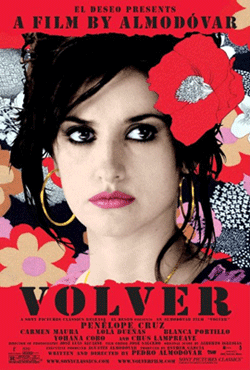 Volver is a 2006 film by Spanish director Pedro Almodóvar starring Penélope Cruz and Carmen Maura (the names are significant if you are at all aware of Spanish film for the past 30 years, or their relationship with Almodovar). Cruz plays Raimunda, a thirty something living in Madrid. She and her sister Sole (short for Soledad, "loneliness") return to the village of their birth in La Mancha for their aunt's funeral. There are rumors that the ghost of the two sisters' mother, Irene (Maura), who died in a house fire alongside their father, haunts the village; a local woman, Agustina, claims she saw her with the aunt. Sole encounters Irene's ghost, who hides away in the trunk of her car. The ghost stays with her daughter, posing as an illegal immigrant working for Sole's salon.

For Raimunda, however, a crisis occurs when her husband, Paco, attempts to rape their daughter, Paula, and she kills him in self defense. This sets in motion a chain of events that involves prostitutes disposing of the body, Raimunda acquiring a restaurant, and Irene trying to find a way to resolve all the family issues she couldn't work through before her death.

The title, for those who do not speak Spanish, means "to return [to a place]."