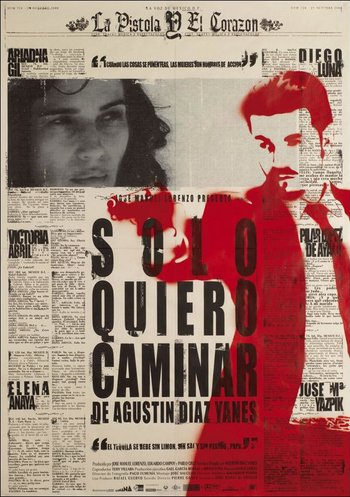 Sólo Quiero Caminar, released in the US as Walking Vengeance; Australia as I Only Want to Walk; and Europe as Just Walking, is a 2008 Spanish drama film directed by Agustín Díaz Yanes.

Aurora is serving a prison sentence for a robbery that went wrong. Her accomplices are outside — her sister Ana, and her friends Gloria and Paloma, four women for whom so far life has not been easy. Ana is a prostitute who likes money, which is why she accepts the marriage proposal of Felix, a dangerous and powerful Mexican drug trafficker who falls for her. She moves with him to live in Mexico. Gloria receives a phone call from Mexico City; it's Ana, who wants her friend to visit her. Her husband's business dealings are very lucrative and she plots to steal from him as revenge for his domestic abuse. Aurora finishes her stretch in jail and Paloma takes her from Madrid to Mexico where Ana and Gloria are waiting. Between the alcohol and her husband's beatings, Ana has designed a dangerous plan to hit back at Felix and his gang. Thrown into the mix is Gabriel, Felix's ruthless assassin and right-hand man, who falls for Aurora.