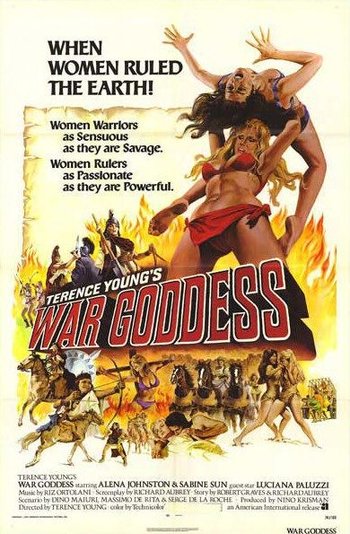 War Goddess (also known as The Amazons) is a 1973 French/Spanish/Italian adventure film directed by Terence Young.

Antiope (Alena Johnston) becomes queen of the Amazons after winning a tournament that includes various trials, defeating Oreitheia (Sabine Sun) in the final test. Antiope imposes a rigid discipline that allows sexual relations with men only to procreate, but after an encounter of the Amazons with the Greeks, Antiope finds that she quite enjoyed her thirst with her man, much to her dismay, who turns out to be Theseus, the king of the Greeks.

Meanwhile, Oreitheia, together with her loyal followers, hatches a plot to eliminate Antiope and take her place on the throne. But when the opportunity to kill Antiope presents itself, their enmity blossoms into something else...