Film / Warrior of the Lost World

THE NUCLEAR WAR HAS BEEN FOUGHT!!!
THE EARTH IS IN RUINS!!!
ALL GOVERNMENTS HAVE COLLAPSED!!!
AN EVIL DESPOT NAMED PROSSOR HAS
ORGANIZED A DEADLY MILITIA TO RULE,
CALLED THE OMEGA. IN THE WASTELANDS
SURVIVE A SMALL GROUP CALLED THE
OUTSIDERS. THEY STRUGGLE AGAINST THE
EVIL PROSSOR AND HIS OMEGAS. INTO
THIS CONFLICT RIDES ONE MAN, ON HIS
SUPERSONIC SPEEDCYCLE. HE IS DESTINED
TO BECOME THE 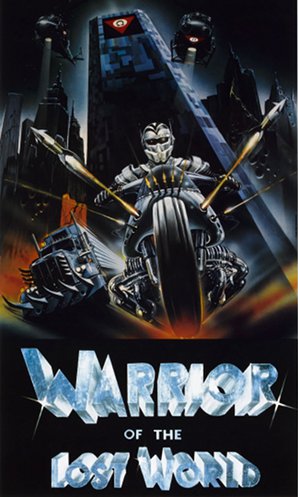 An Italian Mad Max wannabe film. Despite the title, there is no Lost World in this movie, though it may be some kind of metaphor for the post-apocalyptic world.

A Loner/Drifter rides around the (surprisingly lush) post-apocalyptic countryside on his computerized motorcycle Einstein, dodging evil cops and junkyard dwellers. He stumbles across the Mook Army of The Omega, a totalitarian colony, and immediately flees; doing so, he commits the major automotive faux pas of not watching where he's going, and drives face-first into a rock wall.

That's not the end of our hero. The wall he hit was apparently a "Wall Of Illusion," and on the other side reside some crusty old people in togas, who heal his wounds by shining flashlights on them. Why do they do this? They are the Enlightened Elders for The Outsiders, who stand in opposition to The Omega, and our hero is their Chosen One. They want him to infiltrate the Omega colony and rescue one of their leaders, one Professor McWayne, who is about to be executed. Initially refusing, he is convinced when McWayne's daughter Nastasia pulls a gun on his testicles.

This proves both easier and more difficult than any of the characters in this movie make it out to be. While our "hero" rescues the Professor, he leaves Nastasia behind, allowing her to be captured by Prosser. Furthermore, The Omega have at their disposal Megaweapon, a slow-moving armored dump truck with spikes and a flame thrower attached to its front.

The movie is largely known for being a glorious Mad Max rip-off cheesefest starring "The Paper Chase Guy" note Robert Ginty, aka The Exterminator, "The Bald Chick From Star Trek"note Persis Khambatta, Donald Pleasence and Fred Williamson. It was roasted in a 1993 episode of Mystery Science Theater 3000, though multiple prints of the film exist.