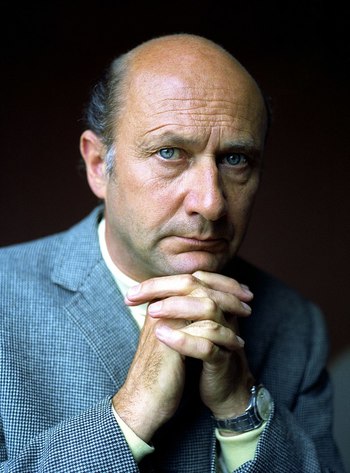 "As far as being idolized by teens, I don't know. It must be some sort of father fixation. Or maybe they think I'm just pretty."
"I am not one of those actors who believes he has to live the part he is playing. I can turn it on and off."

Donald Henry Pleasence OBE (5 October 1919 – 2 February 1995) was an English actor who was credited in over 200 movie and television appearances during a career which spanned over four decades. He is the all-time champion in the category Bald of Evil.

He was often typecast as villainous and/or psychopathic characters, and played an iconic version of Ernst Stavro Blofeld in the James Bond film series. Halloween changed his on-screen image to a more heroic one, although still sometimes ruthless or creepy.