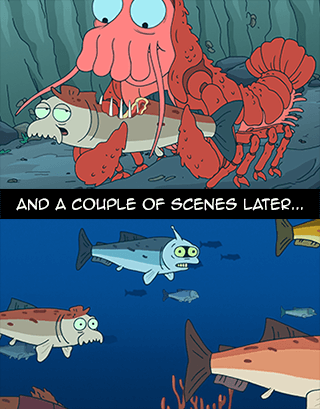 Mad Jack: Didn't you die a while back?
Angus Dagnabbit: Aye. I got better.
Mad Jack: You were DEAD! How do you get better from being DEAD, you Scottish twit?!?!
— Mad Jack the Pirate
Advertisement:

This trope occurs whenever a character is last seen with a serious injury, a situation that no one could survive, or was flat-out clinically dead; and then is returned in full health with no real explanation for their recovery. And Death Is Cheap.

In other words, the only reason the character is still whole and alive is because Status Quo Is God and the writers invoked the First Law of Resurrection: they just didn't want him to remain dead. Alternately, the writers just plain forgot the character died/was injured.

Also one of the possibilities in a Bolivian Army Ending or Left Hanging.

Characters will quickly recover from critical injuries due to Hollywood Healing. If returning from the dead is an explicit power of the character, see Resurrective Immortality.

Common in comedy involving Slapstick such as Looney Tunes, Tom and Jerry and Laurel and Hardy, but is all but guaranteed to be seen as a cheap Ass Pull by the audience if implemented after a serious dramatic moment, unless it's a Deconstructive Parody e.g. having other characters point out how ridiculous it is for them to make such an Unexplained Recovery. If the work in question features both comedy and drama, expect the characters to make Unexplained Recoveries after being injured in the comedic moments, but not after the serious ones.

Compare Snap Back, Staying Alive, Joker Immunity, Made of Iron, and Good Thing You Can Heal. The inversion of Instant Illness.

As this is a death trope, expect spoilers!