Web Animation / Something About 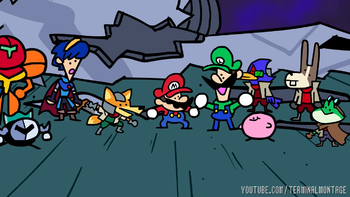 Something about a tropes page.note From left to right: Samus, Meta Knight, Marth, Fox, Mario, Luigi, Kirbo, Falco, Peppy, Slippy.
Something About[...], also known as the Something Series, is a series of parody animations made by a certain Jeremy Chinshue, also known as TerminalMontage. The episodes are often condensed over-the-top parodies of video games, with lots of strange events, running gags, and the occasional sensory abuse... and a bit of memetic mutation, too!
Advertisement:

This series provides something about: