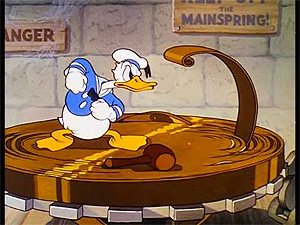 A very popular 1937 short in the Classic Disney Shorts lineup, the short is centered on Mickey Mouse, Donald Duck and Goofy as they, well, attempt to clean the giant clock tower, Big Beth. However, chaos ensues as Mickey attempts to get rid of a stork nesting in the tower, Donald wages a frustrating battle with a sentient clock spring, and Goofy gets himself into life-threatening situations via his own klutziness and stupidity. Naturally, Hilarity Ensues.