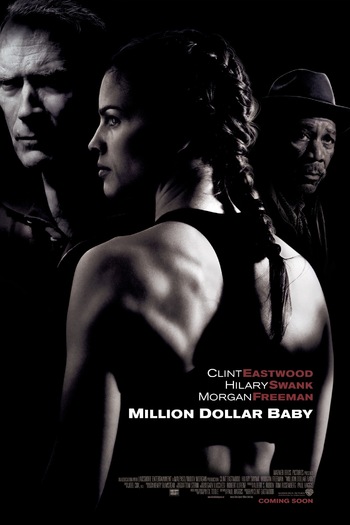 A 2004 American sports drama film directed by Clint Eastwood, who also stars along with Hilary Swank and Morgan Freeman. Paul Haggis adapted the screenplay from the 2000 short-story collection Rope Burns: Stories from the Corner by F.X. Toole.note the Pen Name of real-life boxing trainer Jerry Boyd

The first portion of the movie deals with Maggie trying to get Frankie Dunn (Eastwood), who runs the Hit Pit gym, to train her into becoming a credible boxer. She eventually succeeds and is able to get Frankie and Eddie "Scrap Iron" Dupris (Freeman), another trainer and former boxer, to warm up to her.

After a good deal of training Maggie is able to enter the world of professional women's boxing, where she becomes a remarkably successful fighter. Eventually, however, things take a turn for the worse.