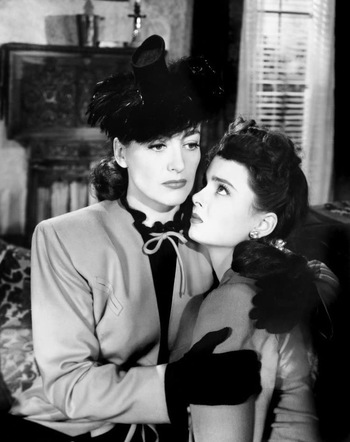 "And I'll do anything for those kids. D'you hear me? Anything!"
"Personally, Veda's convinced me that alligators have the right idea. They eat their young."
—Ida Corwin
Advertisement:

Mildred Pierce began as a 1941 novel by James M. Cain. However, it's best known as a 1945 Film of the Book from Warner Bros., directed by Michael Curtiz and starring Joan Crawford.

The film opens with a single gunshot. Monte Beragon (Zachary Scott) collapses onto the floor, and chokes out "Mildred" before dying. Mildred herself is walking out to the docks, looking over the edge as if to jump. The police take her to the station and she relates her story via flashback.

Mildred Pierce (Crawford) is a typical middle-class housewife in suburbia. Bert (Bruce Bennett) is her recently unemployed husband, and they have two spoiled daughters — pre-teen Kay (Jo Ann Marlowe) and teenaged Veda (Ann Blyth). Bert is against Mildred's parenting style, which he calls "buying them love", but Mildred sees it as protecting them. After fighting over this and Mildred's claims that he has been cheating on her, Bert decides to leave.

Mildred rebuilds her life by becoming a waitress — though Veda sees the work as degrading — and eventually becomes the owner of a successful restaurant chain with help from her friend and former boss Ida Corwin (Eve Arden) and money borrowed from Bert's onetime business partner, callow heel Wally Fay (Jack Carson). Mildred does anything she can to impress Veda, but the snobbish girl insists on regarding her mother as "a common frump whose father lived over a grocery store and whose mother took in washing." Mildred eventually marries Monte, a rich playboy, to impress Veda. Things go downhill from there, until we find out how Monte was killed.

Joan Crawford won a Best Actress Academy Award for her performance, and the film was nominated in several other categories.

In 2011, the original novel was adapted into a three-part, five hour mini-series by Todd Haynes for HBO, with Kate Winslet as Mildred, Evan Rachel Wood as Veda and Guy Pearce as Monty. The mini-series followed the novel more closely than the movie, restoring the novel's Downer Ending and plot points such as Veda becoming a successful opera singer.

Sonic Youth named one of their songs after the film.