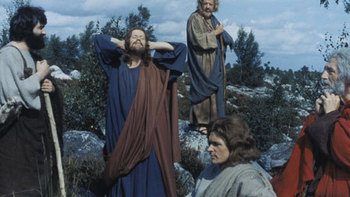 The Milky Way is a 1969 film directed by Luis Buñuel.

Two tramps, Pierre and Jean, are going on a pilgrimage. They are traveling along the traditional pilgrimage known as the Camino de Santiago

, from France to the town of Santiago de Castela in Spain, where the bones of St. James are said to lie in a cathedral. Along the way they see a series of strange events based on the Bible and Catholic history and theology. A strange man appears and tells them to father children named "Ye Are My People" and "No More Mercy". A boy with stigmata appears by the roadside, and hails them a ride. Nuns are crucified. The Angel of Death appears. And other weird stuff happens.

The All-Star Cast of French cinema includes Michel Piccoli as the Marquis de Sade and Delphine Seyrig as a prostitute.