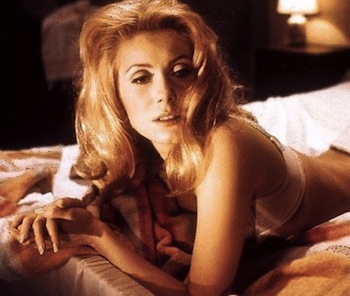 Séverine (Deneuve) looks outwardly like the perfect Housewife. Beautiful, demure, well-mannered and impeccably groomed, she is the very image of bourgeois propriety. In fact she is a masochist who likes to fantasize about being humiliated and treated like a sex object. On the recommendation of a friend, she acts out on these fantasies by becoming a part-time sex worker in an upscale brothel. Since she only turns tricks during her husband's business hours, she is given the moniker Belle de Jour, "beauty of the day".

Available from the The Criterion Collection (No. 593).