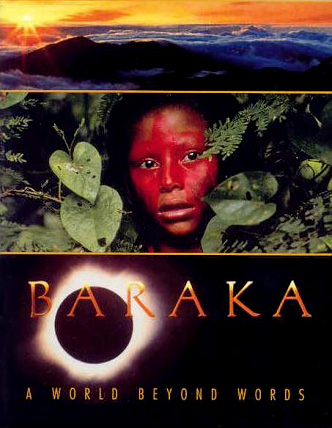 "If man sends another Voyager to the distant stars and it can carry only one film on board, that film might be 'Baraka.' It uses no language, so needs no translation. It speaks in magnificent images, natural sounds, and music both composed and discovered. It regards our planet and the life upon it. It stands outside of historical time. To another race, it would communicate: This is what you would see if you came here."
— Roger Ebert
Advertisement:

Filming was done in 152 locations in 24 different countries around the world. In order to get the full effect, it was shot in the special Todd-AO 70 mm format (using a camera built by Fricke himself), the only film since 1971 to have used such a format, and in 2008 became the first-ever film scanned with 8K resolution.

A sequel, also directed by Ron Fricke and titled Samsara, was released in 2011.

No relationship with that Tarkatan Warrior.