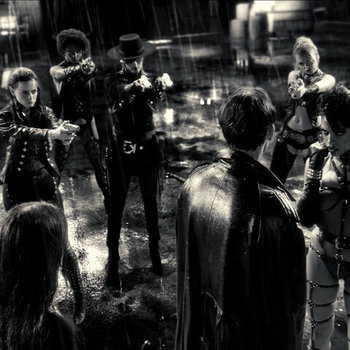 The girls all know the score. No escape. No surrender. No mercy. We got to kill every last rat-bastard one of them. Every last one. Not for revenge. Not because they deserve it. Not because it'll make the world a better place. We need a heap of bloody bodies so when mob boss Wallenquist looks over his charts of profits and losses, he'll see what it cost him to mess with the girls of Old Town.
"Often Licked, Never Beaten."
— One of the mottoes of the Guild of Seamstresses, Discworld
Advertisement:

This is an organization that supervises, um, you know. Working girls. Ladies of the night. Women of negotiable affection. Those in the oldest profession. Those who turn tricks for goods and/or money. They who walk certain streets. Soiled Doves. Women who follow camps. Girls who are on call. Courtesans. In groups: Tray of Tarts, a Blazon of Strumpets, an Anthology of Pros. note You mean prostitutes?

There are some particular benefits of unionisation in the World's Oldest Profession; they might provide daycare for a young Son of a Whore, or security against unruly customers (they might even train the former to provide the latter).

Certainly a Weird Trade Union. Sometimes the Hooker with a Heart of Gold will be a member; there's sure to be at least one Miss Kitty, possibly running the whole thing. Often goes with Unproblematic Prostitution (with implications or outright statements that they're the people who keep it Unproblematic), but not always. Truth in Television as there are many organizations worldwide representing the interests and rights of sex workers

, though they usually aren't seamstresses.