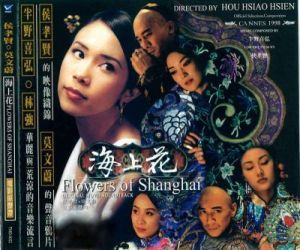 Flowers of Shanghai (海上花, Hǎishàng Huā literally "Flowers above the Sea", a wordplay on the name of Shanghai 上海) is a Taiwanese movie directed by Hou Hsiao-hsien, starring Tony Leung and released in 1998. Adapted from a Chinese novel from the turn of the 20th century, it focuses on the lives of several "flowers" (i.e. high class courtesans) in the brothels of Shanghai in the late 19th century.

The movie is mostly non-narrative, consisting of a series of tableaus, with most of what little action takes place remaining off-screen. Similarly, while a fair bit of talking is done, the really important things are never spoken out loud.

The male patrons come to the flower houses for a good time, which involves eating, drinking, being pampered by attentionate courtesans, and of course sex. The girls, meanwhile, vie for their attention, and either attempt to become a given client's favorite in order to be taken up as a second wife, or save money to buy up their own contract. The world they all live in is one of illusion and manipulation.