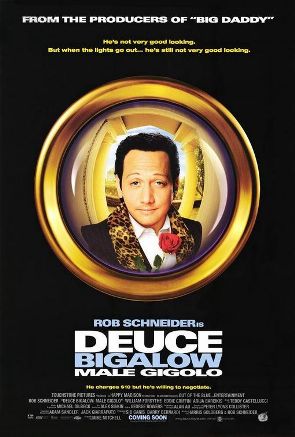 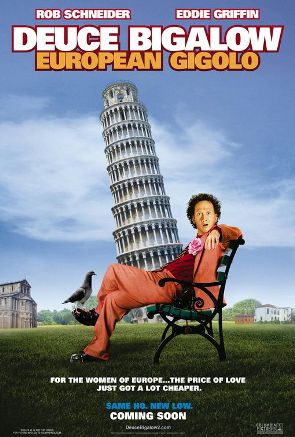 A pair of comedy films starring Rob Schneider as a male prostitute.

Deuce Bigalow: Male Gigolo: (1999), directed by Mike Mitchell. Deuce Bigalow (Schneider) is a down-and-out fish tank repairman who couldn't land a date to save his life. He is called upon one day to examine an exotic fish belonging to high-class male prostitute Antoine Laconte (Oded Fehr), and he determines that it is sick. Antoine asks him to stay at his house and take care of it while he is away. While he is doing so, Deuce ends up smashing the fish tank. In order to raise the money to buy a new one, he decides to masquerade as Antoine, only to find that some of his clients are a little... off-beat.

Deuce Bigalow: European Gigolo: (2005), directed by Mike Bigelow (yes, oddly, the director shares the same first name as that of the director of the first one and the same last name as that of the character). A Serial Killer in Amsterdam is going around killing male prostitutes. Deuce heads there to spend some time with his pimp, T.J., from the first film, only for T.J. to end up being suspected of the murders. T.J. implores him to find the real killer by re-entering work as a gigolo and visiting former clients of those murdered, who likewise turn out to be an oddball bunch. Ironically enough, the sequel may be more famous for Roger Ebert giving the flick one of the most legendary reviews of his careernote Schneider tried to claim that a critic who hadn't won a Pulitzer Prize was "unqualified" to review the film - Ebert, as it turns out, had won a Pulitzer, and thus was qualified to say "Mr. Schneider, your movie sucks" than anything else.

Compare Hung, of which the plot is almost identical.