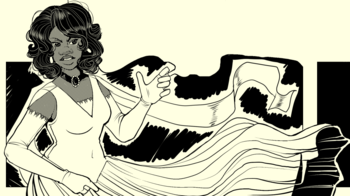 "Who is Ophelia Banksly?"
Advertisement:

Riverside Extras is a neo-noir webcomic by Miranda "Miri" Chamberlain, and a member of Countershot Press

. Right before Prohibition, the city of Riverside, Washington is controlled by two opposing gangs: the male-run Ink, led by Simon Emmett and Jefferson Smith, and the female-run Roses, led by Madeline "Ma" Oceana and the Sisters. At the center of every conflict is the mysterious Ophelia Banksly. Who is she? Where did she come from? What does she want?

Notable for having a sophisticated, Deliberately Monochrome art style with splashes of red (the page image notwithstanding), its female-heavy cast, the Femme Fatale being the main character rather than being defined by her relationship with a Private Detective, and said main character being a black woman working for a majority-white gang in 1919, facing all the racism you'd expect.

You can read the comic so far here.

(though it's certainly possible to pick up on it as you go along).