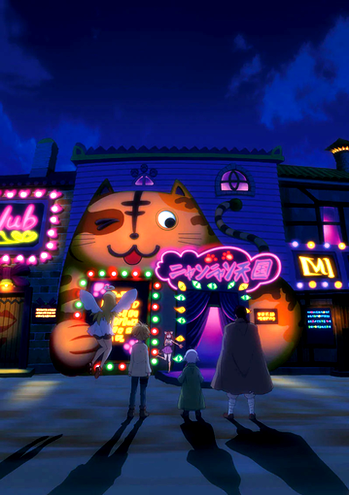 ♫ Welcome to the House of Fun! ♫
In this world, there are humans, elves, fairies, beastmen, monsters, spirits, angels, and demons. Truly, a melting pot of sentient creatures. As such, this wonderful world abound with diversity is, naturally, abound with a diverse selection of brothels. These myriad brothels and the girls who work there, succu-girls, are reviewed by a group of brave adventurers! They are... the Interspecies Reviewers!
— Opening Narration
Advertisement:

The setting is a fantasy world of monsters and adventurers, populated by humans, elves, dwarfs, beastmen and many, many more different and distinct races.

Our main heroes, Stunk, human swordsman, and Zel, elf archer, travel the lands far and wide. Do they seek glory, riches or adventure? Nay, they wanna find the best lay out of all! Thankfully for them, prostitution is legal and brothels abound, so finding a partner is no issue.

...Which cannot be said for them actually agreeing on which race is the best. In order to put the discussion to rest, they start posting reviews of their "encounters" on the adventure board, though their escapades quickly become a profession in and of itself as they find themselves getting paid for their work to further fund their journey. Along for the ride is Crimvael "Crim", a Hermaphrodite angel who finds himself reluctantly roped into their adventures out of gratitude for them saving his life and since he could use the extra coin while he waits to get back into Heaven.

The manga has an official channel on Nicovideo, where they post previews and digital releases of the chapters.

A Light Novel that features both original stories and some expanded stories from the manga is written by Tetsu Habara and illustrated by W18, with the first volume released in Japan in December 2018.

An additional manga anthology of original stories by various artists,note including Okayado, Ganmarei, and Cool-Kyou Shinsha Interspecies Reviewers Comic Anthology: Darkness, was released in Japan in January 2020, with a second anthology volume released in February 2021.

The manga itself essentially ended in early 2021 but thanks to the massive approval of the fanbase instead went on a hiatus until early 2022 where it started up again.

An anime television series adaptation by Passione premiered on January 11, 2020, which was available for streaming on Funimation, offering both subtitlesnote First three episodes. and dubbingnote For the first episode. until they stopped simulcasting it later that month

◊. However, other regional streaming services, such as Australia's AnimeLab

, continued to stream the series with subtitles.note AnimeLab's service also extends through New Zealand, and Wakanim has a Russian service, but their nordic regional service has since been pulled. Though, their streams are region locked. The English-subtitled Blu-ray was released in January 2022 by Critical Mass Video.

Sounds like a straight version of The Village People's "YMCA", wouldn't ya says? (Footage censored by Xyssia on YouTube)

Sounds like a straight version of The Village People's "YMCA", wouldn't ya says? (Footage censored by Xyssia on YouTube)