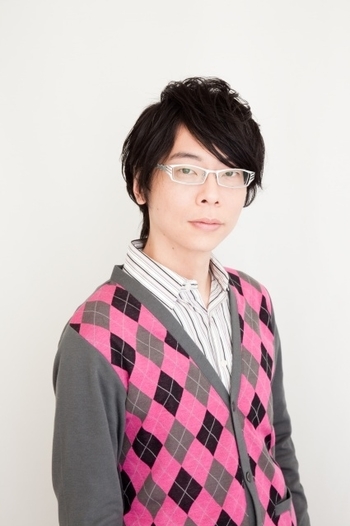 Junji Majima (born 13 May 1978) is one of the newer seiyuus of the 2000s. In 2008, Majima's role of nice-guy-behind-tough-exterior Ryuuji Takasu of Toradora! ended up giving him his big break. Since then he has been playing harem protagonists (or at least supporting characters), and has been paired together with Rie Kugimiya twice for Toradora! and Aria the Scarlet Ammo, both of which are JC Staff productions note thrice if you include Fairy Tail. He also plays the Prinnies in the Disgaea series, and other Nippon Ichi titles. For slightly more notable seiyuu with similar typecasting, see Satoshi Hino for the Turn of the Millennium and Yoshitsugu Matsuoka for The New '10s.

He takes the name "Kiya Suga" when providing voice for R-rated works.