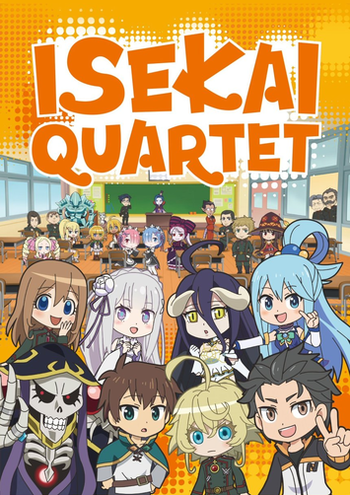 Introducing the Isekai Cinematic Universe!
"In this universe, mirrors of worlds exist. In these worlds, our characters are living each one of their own lives. However...what if, the worlds have changed?"
— The unfittingly dramatic Isekai Quartet Special Announcement

Isekai Quartet (異世界かるてっと Isekai Karutetto) is a Japanese anime series that serves as a chibi-style parody crossover between the light novel series KonoSuba, Overlord (2012), Re:Zero − Starting Life in Another World, and Saga of Tanya the Evil, all published by Kadokawa Corporation.

It was licensed by Funimation with an English dub being released on April 27, 2019. A second season of the series, with the addition of the cast of

The Rising of the Shield Hero, premiered on January 14, 2020. A third season

was announced at the end of the second season. A movie

, titled "Gekijо̄ban Isekai Quartet ~Another World~", has been announced to release in 2022.

A Spin-Off Smartphone game, Isekai Quartet: Gekitotsu! Puzzle School, was scheduled to release in July 15, 2021, but was announced to be delayed a day before its release to improve the quality of the game.

The anime has examples of the following tropes: