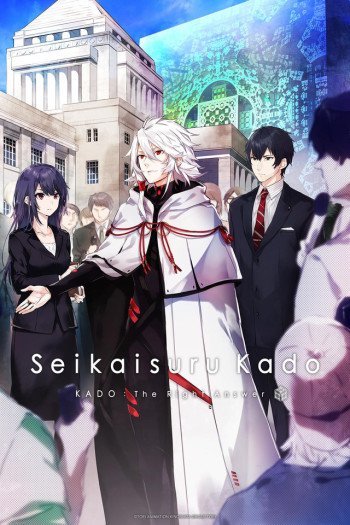 Koujiro Shindo. A highly skilled and sought after negotiator for the Ministry of Foreign Affairs. Scarily good at what he does, he prepares to depart by plane for his next assignment.
Advertisement:

But he and the other passengers aren't going anywhere, as their plane is suddenly enveloped by an impossibly huge cube. A pulsing object of obviously inhuman origin and design.

While those on the outside scramble to try and make sense of what they're witnessing, Shindo and the plane are alive and well inside this cube. But they're not alone.

This is the KADO. And its mysterious occupant, Yaha-kui zaShunina. Yaha-kui zaShunina wishes to speak with humanity, and he needs a negotiator. Shindo and the world at large can only guess what this enigmatic visitor from beyond has in store for humanity.

Kado: The Right Answer (or Seikaisuru Kado) is a 2017 CGI anime produced by Toei Animation and written by novelist Nozaki Mado, and can be legally viewed subbed on Crunchyroll here

The series received a manga adaptation as well as a spinoff manga, detailing how the civilians are dealing with zaShunina's arrival on Earth and the gifts he gives to humanity and set from the perspective of two high school students. An alternative take on the tale written by Mado, Seikaisuru Mado, was published shortly after the anime finished up.

A movie retelling the events of the anime, Kado: Beyond Information, premiered at Anifilm in 2018. The movie advertises itself with a different ending than the anime's version, which it delivers on. The movie was available for free with subtitles here