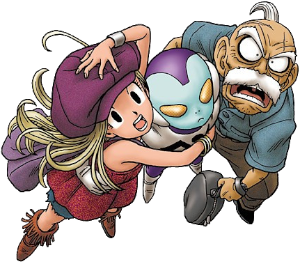 Jaco the Galactic Patrolman is an 11-chapter miniseries by Akira Toriyama that was serialized in Weekly Shonen Jump from July to October 2013. It centers around Jaco, a Galactic Patrolman who was sent to Earth in order to intercept a dangerous alien sent to the planet. However, upon arrival he damages his spaceship, leaving him with Omori, a retired scientist who used to deal in Time Travel experiments. Together, Jaco and Omori have various mishaps involving their attempts to fix Jaco's spaceship, intercept the incoming alien invader and prevent an upcoming rocket launch with Idol Singer An Azuki from ending in tragedy.

NOTE: Due to having a heavy case of The Ending Changes Everything, all spoilers are unmarked.