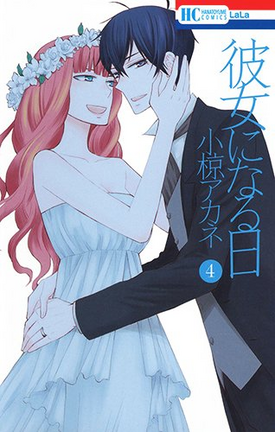 Kanojo ni Naru Hi (The Day He Became A Girl) is a Manga series by Ogura Akane.
Advertisement:

Miyoshi is always competing and losing against his childhood friend, Mamiya, who is good at everything and completely unable to resist a challenge. But their more-or-less friendly rivalry is broken when Mamiya is hospitalized and emerges as a girl. In Mihoshi and Mamiya's world, "emergence" is a natural process that maintains the ratio between the sexes. Whenever there aren't enough women some boys transform into girls. While emergence isn't exactly uncommon (tens to hundreds of cases every year) it usually happens in young children who are rapidly developing anyway, otherwise the resulting stresses on the body are very dangerous to teenagers and invariably fatal for adults.

Refusing to mope Mamiya, breezily returns to school unequivocally and seemingly unabashedly female, determined to seize life as a girl and equally determined to help Miyoshi overcome his severe gynophobia. But Miyoshi soon comes to suspect that there's actually a great deal of turmoil going on beneath Mamiya's seemingly happy-go-lucky surface.

In the sequel Kanojo ni Naru Hi Another Sagara, a short, slight, and girly-looking boy who has cultivated a tough-guy image to compensate emerges as a girl halfway through his second year of middle school and is forced to confront a stark choice between maintaining his identity as a boy and forging a new identity as a girl, a choice only complicated by a new attraction to Narumi, his rival for the affections of the cool, collected class representative Kurokawa.