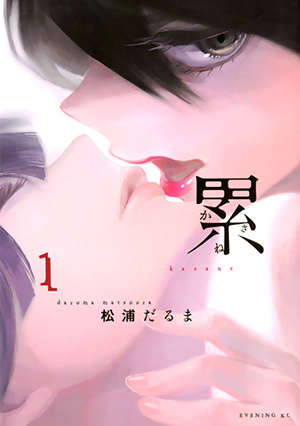 You think kisses are romantic? Think again.
Mother was beautiful. Everyone saw her as a legendary actress. She left this world before her beauty faded… and abandoned me down here, alone with my ugliness.

Fuchi Kasane is the daughter of Fuchi Sukeyo, a late stage actress renowned for her incredible acting and stunning beauty. From her, Kasane inherited the former trait… not the latter. Rejected by her father, and after the death of her mother, she's constantly bullied for her repulsive ugliness. Her life changes in grade school, on the day she remembers what her mother said about a lipstick she left her: if she kisses someone's lips with this lipstick on, she can make their face hers for twelve hours. The first person she tries that trick on is Ichika, a pretty girl who is also her bully-in-chief. She manages to take Ichika's place during the school-play, and mesmerize the audience… but her victim accidentally dies during their fight soon afterwards.

A few years later, Kasane, now a young woman, is contacted by a fishy producer named Habuta Kingo. The man knows about her power and wants her to use it to help Tanzawa Nina, a beautiful but unsuccessful young actress. The deal is simple: Kasane will use her lipstick and her talent to propell "Nina" into fame. Still traumatized by her first experience with using it, she reluctantly agrees… but soon she becomes increasingly addicted to this new life where she is admired and loved instead of despised. But how far is she willing to go to keep up the masquerade?

Kasane is a Psychological Thriller by Matsuura Daruma, published in Koudansha's biweekly seinen magazine Evening from 2013 to 2018, with 14 volumes total. The series is published in English by Kodansha Comics. A prequel novel named Izana (written by the author herself) was also published, centering of Kasane's mother and her cursed life in the small village of Akeiwa. A live-action adaptation was also released in September 2018, directed by Satou Yuuichi.

Not to be confused with a 2007 manga of the same name by Tanabe Gou.

Tropes found in the novel Izana