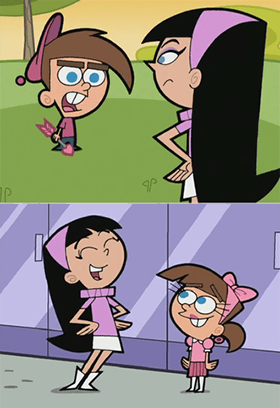 "I have always enjoyed the company of women, and being one myself removes a lot of social barriers."
— Valesti Disore (formerly John Glasken), Eyes of the Calculor
Advertisement:

Oh no! Somehow your sex has changed! Just when you were working up the nerve to confess your love to that classmate you like! But wait, this situation isn't hopeless...

Now you're the same sex (this trope only seems to happen to heterosexual, cisgender people) as them. If you become their best friend, maybe you can learn enough about them to date them as your true self, and they'll never figure out that you are the same person! Of course like all the best plans it can and will go awry.

May occur with either Gender Bender or crossdressing (Disguised in Drag or Sweet Polly Oliver) scenarios. Compare and contrast Jumping the Gender Barrier and Unsettling Gender Reveal. Like most Gender Bender tropes this is generally subject to the First Law of Gender-Bending, but there are exceptions.