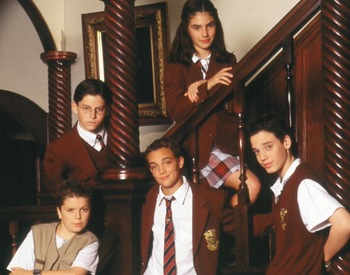 "[...] You attract the paranormal like dogs attract fleas."
— Cam
Advertisement:

The Zack Files was a Canadian live-action paranormal show that aired from 2000 to 2002 that was based off of a willfully strange and off-the wall children's book series. The show revolved around Zack Greenburg and his friends Cameron, Spencer, and Gwen as they experience various paranormal hijinks thanks to Zack essentially having a literal Weirdness Magnet-gene. Spencer chronicles these adventures, which he dubs "The Zack Files" in his hopes of studying and proving the existence of the paranormal.

Coincidentally, this show has several of the same cast members as Black Hole High, and a number of the actors wound up on Degrassi: The Next Generation.