The Only One I Trust 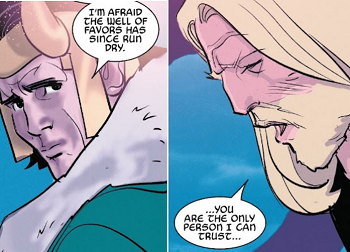 Scully: Mulder, you're the only one I trust.
Mulder: Then you're gonna have to trust me.
— The X-Files, "E.B.E."
Advertisement:

Alice is in a difficult situation: perhaps she's chased by the cops, or maybe she has a secret she cannot let out. She thinks she's completely alone against the world, but wait. Bob is there, and he's the only one Alice can rely on.

Discovering that there is only one trustworthy person remaining is a difficult moment. This is typically exploited to emphasize the sense of danger. That, and to build suspense around just whether that trust will be justified.

If the trust is justified, then it's probably directed to the Secret-Keeper, The Consigliere, The Lancer (or The Dragon) or the Only Sane Man. When the person you thought you can trust betrays you, it slips into Et Tu, Brute?. See also The Power of Trust.

Alternative Title(s): The Only One I Can Trust