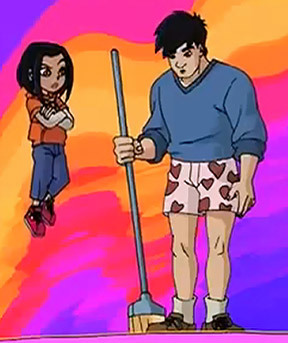 "Quite an example you're setting for your niece dressing like that."
"I dream I'm in a plane, and slowly crashing; it's slowly crashing down on a street in San Francisco, and I'm way up at the cockpit, and I turn to everybody and I say, 'Listen, I don't think this is a real plane crash, 'cause I happened to notice that I'm not wearing any pants.' And whenever I'm not wearing any pants, it's probably a dream."
— Adam Savage, MythBusters
Advertisement:

A stock dream where the subject finds themselves in a familiar social institution (usually school or the workplace) wearing only their underwear, or sometimes nothing at all. This is often coupled with a high-pressure task (such as an examination or a deadline), and the thought that you have somehow forgotten to get dressed this morning. In many cases no one else in the dream notices the dreamer isn't wearing enough clothes until the dreamer themselves notices at which point they typically react by pointing and laughing at the dreamer, who then notices their nudity and react with a Naked Freak-Out. Usually followed by a Skyward Scream followed by them waking up in a Catapult Nightmare.

This kind of dream is definitely Truth in Television and quite common in fact, though perhaps not as much as media shows it, nor always with the same structure and conclusion. After all, Real Dreams are Weirder.

See also Out-of-Clothes Experience, Comedic Underwear Exposure, and Naked Freak-Out. Not to be confused with Pants-Free (a specific sight gag where someone is revealed to be partly undressed Behind the Black); the everyday attire of a Half-Dressed Cartoon Animal; a superhero who is Not Wearing Tights; or situations where a character isn't wearing pants but doesn't care. Also not to be confused with Going Commando. Expect Goofy Print Underwear to make an appearance in most cases of this.

The inversion is Nude-Colored Clothes. To a British audience, this trope would be "only wearing pants" since in Britain "pants" are what Americans call "underpants". "Not wearing pants" in Britain would either be "going commando" or "completely nude".

If someone finds themselves unexpectedly naked in public when they're awake, see Naked People Trapped Outside and Gone Swimming, Clothes Stolen. See Sleeps in the Nude for characters who sleep in the buff and Undressing the Unconscious for characters that are stripped while they're unconscious.

Crashing Dreams may have this as Five-Second Foreshadowing the character is about to wake up naked and awkward. See also Cringe Comedy.