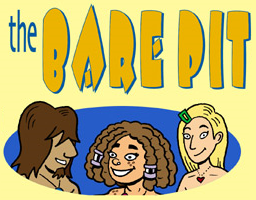 The Bare Pit, originally under the name Loxie and Zoot, by Grace Crowley (also the author of Magellan) is a comic about the Koala Bay Bares Naturist Resort in Australia, a resort full of nudists.

But wait, don't be squicked! The comic is actually fairly wholesome, with a wide variety of characters, body types and plots. The comic also consciously avoids soapboxing about the issue of nudism, instead usually treating it as part of the setting.

Oh yeah, the comic is very NSFW due to the nudity, but the story is worth sticking around for.