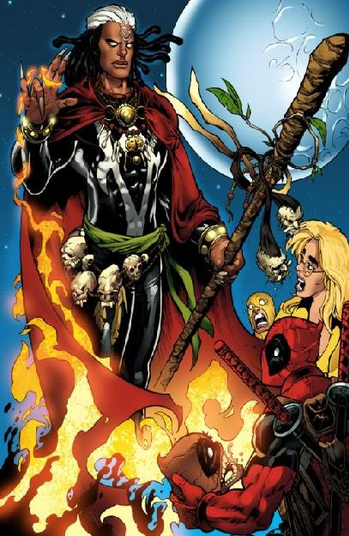 In most fantasy series, if the resident spellcaster isn't a long-white bearded Merlin type, or a Vain Sorceress, then they're probably reminiscent of a non-European culture (or at least a European culture outside the Western European Germanic- and Romance-speaking countries). Part of this is Flawless Token. After all, if magic is that world's equivalent of science, somebody particularly adept at it is The Smart Guy. Also, many African and Asian cultures (not just Egypt) were already advanced in terms of agriculture, literature and so on, while Europe was just getting itself together. On the other hand, it becomes something of a cultural Flanderization, reinforces stereotypes of non-whites having some mystical nature, and may evoke a sense of the hero being full of valor and vigor, while the darker skinned spellcaster is a weaker Squishy Wizard.
Advertisement:

Common in sword and sorcery settings, though in Westerns, Native Americans will fill the mystic slot. Those of African origin, including their descendants in the Americas (especially in Haiti and New Orleans), would practice Hollywood Voodoo; meanwhile, Aboriginal Australians are steeped in Hollywood Dreamtime. Scandinavian works have historically tended to use the Sami people, and Japanese works often use white or Chinese people for this role, but the principle is the same.

Not to be confused with Magical Negro (or its supertrope Magical Minority Person) or Token Wizard, though both overlap from time to time. Often results in Religion Is Magic. Related to Magical Romani, Magical Native American, and Magical Asian. Compare Witch Doctor, which may be the progenitor.