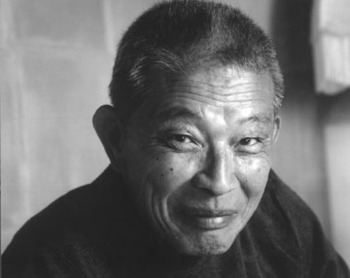 Long ago, in a distant land... I, MAKO, the multi-talented master of voices, unleashed an INCREDIBLE PERFORMANCE! But, a foolish Troper, wielding his magic abilities, stepped up to oppose me!

Makoto Iwamatsu (December 10, 1933 — July 21, 2006), commonly known simply by Mako, was a Japanese-American actor and voice actor. He was born in Kobe, Japan. He immigrated to The United States as a young child, later becoming a citizen. He also had married actress Shizuko Hoshi, and left two daughters (both actresses) and three grandchildren.

Mako's first film role was an uncredited one in the 1959 movie Never So Few. He went on to appear in many other productions, starting with the 1966 movies The Sand Pebbles and The Ugly Dachshund, and also including The Hawaiians, The Killer Elite, The Island at the Top of the World, Highlander III: The Sorcerer / Final Dimension (as well as Highlander The Series), Conan the Barbarian and Conan the Destroyer, Under the Rainbow, Sidekicks, RoboCop 3, Seven Years in Tibet, and Pearl Harbor. His television appearances include M*A*S*H, The Time Tunnel, I Spy, Hawaii Five-O, The Green Hornet, Kung Fu, Mannix, Ironside (1967), and Columbo.note Columbo episode "Murder Under Glass" He was nominated for an Academy Award for Best Supporting Actor in The Sand Pebbles, and a Tony Award for Best Leading Actor in a musical for his role in the original of Pacific Overtures.

Mako's last leading role was in the 2005 film Cages. The last work he contributed to was the animated movie TMNT, in which he recorded the voiced role for Master Splinter mere days before his death. The finished film was later dedicated to his memory. An episode of Avatar: The Last Airbender (in which he voiced the character Iroh, until his death between the second and third seasons) also had the send-off, 'In Honour of Mako', and gave a major character in its sequel series his name. Mako has a motion picture star on the Hollywood Walk of Fame at 7095 Hollywood Blvd.

Mako was also well-known as an advocate for Asian-American representation. Along with several other actors, including James Hong and Soon-Tek Oh, in 1965 he co-founded the East West Players

, an Asian repertory theater company in Los Angeles and served as its artistic director until 1989.

Greg Baldwin would serve as The Other Darrin for other animated works that Mako was previously involved in.

Not to be confused with the Japanese voice actress of the same name.

Before the final hit was struck, I tore open a portal in time and pummeled him into the future where my talent ls law! Now the fool seeks to return to the past...and undo the future that is MAKO!
Feedback

Leaves from the Vine

Iroh mourns the loss of his son, Lu Ten, while at the city where he fell in battle. This scene doubles as a memorial for Iroh's voice actor, Mako, who passed during the airing of season 2.

Leaves from the Vine

Iroh mourns the loss of his son, Lu Ten, while at the city where he fell in battle. This scene doubles as a memorial for Iroh's voice actor, Mako, who passed during the airing of season 2.