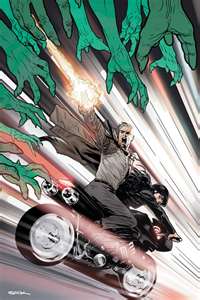 The common blue-collar warlock. His castle is an apartment flat. His magical staff is a cigarette. His Shadowfax is a taxi cab. His elixir is beer. His magical robe is a trenchcoat. His damsel in distress is a cocky gothic gun-toting girl.
"I have an idea that most of the mystics in comics are generally older people, very austere, very proper, very middle class in a lot of ways. They are not at all functional on the street. It struck me that it might be interesting for once to do an almost blue collar warlock. Somebody who was streetwise, working class, and from a different background than the standard run of comic book mystics. Constantine started to grow out of that."
— Alan Moore interview about John Constantine

Whenever we think of wizards, sorcerers, or mages, the first thing that pops in our minds are old wise men, long staffs, magical wands, pointy hats, and long beards. The blue collar warlock is a different kind of magic-user. He lives in no medieval fantasy setting, but instead lives in something more contemporary. They are sorcerers who modernized and you may cross paths with one on the streets. They might live among us and use magical artifacts that look like mundane items. Unlike contemporary warriors, they fight with the use of old-fashioned magic and the occult. Streetwise in the face of danger, some may be good, while others are sinister. Sometimes they are Occult Detectives or Stage Magicians. See also Trenchcoat Brigade. Contrast Gentleman Wizard.