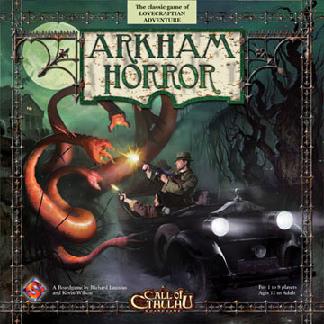 Arkham Horror is an Adventure Board Game based on H. P. Lovecraft's Cthulhu Mythos and taking place in the 1920s. It was designed by Richard Launius in 1987 for Chaosium and was revamped and re-released by Fantasy Flight Games in 2005. The players must cooperate as a handful of investigators trying to prevent the awakening of an Ancient One with the fate of the city of Arkham, and sometimes the whole world, in the balance. The investigators will collect ordinary and magical items, explore forgotten or forbidden regions of the town, battle monsters, enter alien worlds, and (per the setting) go gibbering insane in the process.

The game is fairly complicated and features a staggering amount of cards, markers, and counters. Three decks of standard size Ancient One cards are used for random encounters and events. Nearly a dozen decks of smaller sized Investigator cards track the possessions/status of the players. There are fistfuls of cardboard counters for health, sanity and money, monster markers, and other miscellaneous tokens. Success or failure is determined by a pool of six-sided dice; every roll of five or six counts as a success, but modifiers can add or subtract from the dice pool for your roll and difficult tasks can require multiple successes.

Investigators are the player characters. Each investigator has scores for stamina and sanity, some set and random starting items, and a special ability such as healing or extra income. They also have a collection of linked and adjustable attributes, so raising one stat will lower its counterpart. For example, you can move faster at the expense of stealth to speed through the town on one turn and next turn change scores to sneak past the monster guarding your destination at a snail's pace.

The Ancient One is a powerful, alien monster featured in the Cthulhu Mythos, including Cthulhu himself. Each Ancient One has a character sheet akin to an investigator which includes special rules that modify the game as a whole (such as ongoing harmful weather), rules modifying its favourite monsters, and combat stats should it awaken. One is randomly drawn to be your antagonist for the game and the players ultimately race against time to prevent its awakening. Almost every turn a counter will be added to the doom track. When full, it awakens and the investigators have one last chance to defeat it. There are very few ways to slow the doom track down and many to speed it up. It also serves as a “health” meter during the fight. Ancient Ones are horribly powerful in combat, often resistant or immune to forms of damage and usually able to kill unlucky investigators who fail to meet specific requirements before combat even begins.

The game is played on a large board depicting Arkham city (no, not that one) and divided into neighbourhoods with multiple locations within them. Random encounters can occur at almost any location in the game and the encounters range from paranormal horror to mundane accidents. Some areas provide set beneficial effects that allow the players to shop, heal, or learn new skills. On the long side of the board are the other world locations representing alien dimensions like Yuggoth or lost terrestrial regions like the Plateau of Leng. Investigators must brave the other worlds to seal the portals; while they generally don't encounter monsters while doing so, they often face other threats to their health and sanity.

Mythos cards control the flow of the game. One is drawn at the start of each turn. A mythos card will open portals, move monsters, reveal clues, and activate other events that can hinder or help the investigators. Portals open in unstable locations and release monsters. Having too many open portals can awaken the Ancient One early. Portals can only be closed after slowly exploring the other world linked to it, and in most cases, they can be reopened later in the game. Every new portal brings at least one new monster to the city. Monsters move randomly based on a series of black and white arrows on the game board and the mythos card drawn, and some also have special movement rules such as being able to fly. While you can attempt to evade monsters with stealth, they must ultimately be dealt with; having too many monsters in play is not only dangerous and obstructive, but will advance the terror track. The terror track measures the level of fear in Arkham’s residents, and the higher the track advances, the fewer services and allies will remain in town.

Eight Expansion Packs have been produced for Arkham Horror second edition. Four of them are larger expansions with new boards representing other cities in New England, a host of new investigators, Ancient Ones, and monsters. They're also almost as expensive as the original game. The four smaller expansions feature a few new rules, monsters, and additional cards in the base game. A major new rule spanning the expansions is the addition of the Herald, a powerful monster acting against you and serving as the Ancient One's Dragon. A later expansion adds Guardians, which are beings and/or organisations supporting (or at the very least being on roughly the same side as) the Investigators.

Expansion Details
Curse of the Dark Pharaoh: Small expansion. An exhibit of Egyptian artefacts has arrived in Arkham and is stirring up trouble.

In 2011, a revised edition was released. Among the changes:

The Dunwich Horror: Large expansion. In a rural town outside of Arkham, a family of sorcerers have created an abomination that threatens mankind. Adds eight investigators, four Ancient ones, and two other worlds.

The Kingsport Horror: Large expansion. Mythos-related problems are starting in nearby Kingsport, however, there are friendly powers intervening for humanity. Adds eight investigators, four Ancient Ones, two other worlds, and two new heralds.

The Black Goat of the Woods: Small expansion. The cult of Shub-Niggurath is rising in power and must be stopped.

The Innsmouth Horror: Large expansion. This town is directly under the control of Mythos forces and its Deep One masters are making their move for power. It introduces sixteen new investigators, eight new Ancient Ones, two new heralds.

The Lurker at the Threshold: Small expansion. It's realised that the portals opening through Arkham are extensions of Yog-Sothoth, and it must be confronted to save the city.

Miskatonic Horror: Large expansion. A discovery at Miskatonic University has created new mysteries concerning Arkham's dark days. Unlike other large expansions it doesn't add a new board, new rules, and new features to the game, rather it builds on the additions from other expansions by adding more cards to the pools (such as new exhibits and cult encounters).

Fantasy Flight also produced many spin-offs. Among them are:

Novel details
A third edition was released in 2018. It significantly retools the game and introduces many mechanics from the various spinoffs; in particular, every play session is based around a given scenario with its own story, and the story can play out in a number of ways depending on what the investigators do.

Asmodee Digital announced Arkham Horror: Mother's Embrace, a turn-based RPG with an original story and similar mechanics to those found in the tabletop games. It was released on March 23, 2021.

Arkham Horror can be found here

. Fantasy Flight gives outstanding support to the game, including .pdf files of all rulebooks, new Heralds and investigators, and rules for tournament/league play.

Arkham Horror shares many tropes with the greater Cthulhu Mythos. The board game directly features examples of:

The game in general