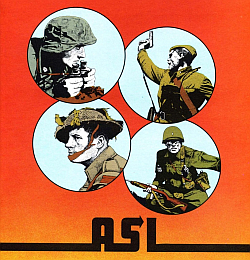 Advanced Squad Leader, or ASL for short, is a War Game set in World War II and first released in 1985 by Avalon Hill. Today, it is maintained by Multi-Man Publishing (MMP). As the name suggests, it is based on a previous game called Squad Leader. Along with Victory in the Pacific, it's one of the last few Avalon Hill wargames to still support multiple national face to face tournaments.

ASL is notable for being quite rules-heavy and is often cited as one of the most complex wargames ever. The basic game consists of a three-ring binder containing rules for infantry, tanks, paratroopers, landing boats, artillery support and even basic air combat plus a big box called "Beyond Valor" containing some geomorphic mapboards, German, Finnish and Russian unit counters and several scenarios. Additional modules expand the game with more boards and scenarios and with units for basically every country that fought in any theatre of WWII. Some modules focus on campaign play around a single historical battle, while others offer a less steep learning curve for beginners or improved solitaire play.

The game is played on a quite detailed level, with a single counter representing up to 15 soldiers, a single commander or a single vehicle and scenarios usually depicting ten to twenty minutes of a skirmish in a small village or block of houses.

Some years ago, MMP introduced a new product line called the Starter Kits, which were originally meant as a tutorial for new players. Since then, the Starter Kits have taken on a life of their own with many players opting to play only the Starter Kits as opposed to switching to "Full ASL".